The inputs go by different names, such as:

The output variable is often called:

In this formulation, we say $f $ represents the systematic information that $ X $ provides about $ Y $.

In essence, statistical learning refers to a set of approaches for estimating $ f $.

There are two main reasons that we may wish to estimate f: prediction and inference.

In many situations, a set of inputs $ X $ are readily available, but the output $ Y $ cannot be easily obtained. In this setting, since the error term averages to zero, we can predict $ Y $ using

where $ \hat f $ represents our estimate for $ f $, and $ \hat Y $ represents the resulting prediction for $ Y $. In this setting, $ \hat f $ is often treated as a black box, in the sense that one is not typically concerned with the exact form of $ \hat f $, provided that it yields accurate predictions for $ Y $.

The accuracy of $ \hat Y $ as a prediction for $ Y $ depends on two quantities, which we will call the reducible error and the irreducible error.

In general, $ \hat f $ will not be a perfect estimate for $ f $, and this inaccuracy will introduce some error. This error is reducible because we can potentially improve the accuracy of $ \hat f $ by using the most appropriate statistical learning technique to estimate $ f $.

However, even if it were possible to form a perfect estimate for $ f $, so that our estimated response took the form $ \hat Y = f(X) $, our prediction would still have some error in it! This is because $ Y $ is also a function of $ \epsilon $, which, by definition, cannot be predicted using $ X $. Therefore, variability associated with $ \epsilon $ also affects the accuracy of our predictions. This is known as the irreducible error, because no matter how well we estimate $ f $, we cannot reduce the error introduced by $ \epsilon $.

The focus of this book is on techniques for estimating $ f $ with the aim of minimizing the reducible error. It is important to keep in mind that the irreducible error will always provide an upper bound on the accuracy of our prediction for $ Y $. This bound is almost always unknown in practice.

We instead want to understand the relationship between $ X $ and $ Y $, or more specifically, to understand how $ Y $ changes as a function of $ X_1, \cdots, X_p $. Now $ \hat f $ cannot be treated as a black box, because we need to know its exact form.

The company is not interested in obtaining a deep understanding of the relationships between each individual predictor and the response; instead, the company simply wants an accurate model to predict the response using the predictors. This is an example of modeling for prediction.

In contrast, one may be interested in answering questions such as:

This situation falls into the inference paradigm.

Depending on whether our ultimate goal is prediction, inference, or a combination of the two, different methods for estimating $ f $ may be appropriate. For example, linear models allow for relatively simple and interpretable inference, but may not yield as accurate predictions as some other approaches. In contrast, some of the highly non-linear approaches that we discuss in the later chapters of this book can potentially provide quite accurate predictions for $ Y $, but this comes at the expense of a less interpretable model for which inference is more challenging.

Our goal is to apply a statistical learning method to the training data in order to estimate the unknown function $ f $. In other words, we want to find a function $ \hat f $ such that $ Y \approx \hat{f}(X) $ for any observation $ (X, Y) $.

Broadly speaking, most statistical learning methods for this task can be characterized as either parametric or non-parametric.

Assuming a parametric form for $ f $ simplifies the problem of estimating $ f $ because it is generally much easier to estimate a set of parameters.

The potential disadvantage of a parametric approach is that the model we choose will usually not match the true unknown form of $ f $.

We can try to address this problem by choosing flexible models that can fit many different possible functional forms for $ f $. But in general, fitting a more flexible model requires estimating a greater number of parameters. These more complex models can lead to a phenomenon known as overfitting the data, which essentially means they follow the errors, or noise, too closely.

Non-parametric methods do not make explicit assumptions about the functional form of $ f $. Instead they seek an estimate of $ f $ that gets as close to the data points as possible without being too rough or wiggly (constantly moving, especially with small, undirected movements).

1.3 The Trade-Off Between Prediction Accuracy and Model Interpretability

Of the many methods that we examine in this book, some are less flexible, or more restrictive, in the sense that they can produce just a relatively small range of shapes to estimate $ f $.

Others are considerably more flexible because they can generate a much wider range of possible shapes to estimate $ f $. 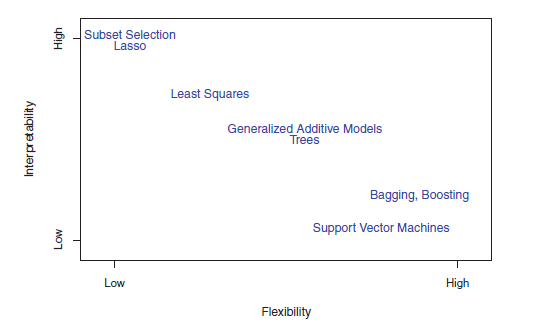 How to choose models:

2.1 Measuring the Quality of Fit

In the regression setting, the most commonly-used measure is the Mean Squared Error (MSE)

The MSE is computed using the training data that was used to fit the model, and so should more accurately be referred to as the training MSE.

The test MSE, or average squared prediction error is measured on test observations. We’d like to select the model for which the test MSE is as small as possible.

As model flexibility increases, training MSE will decrease, but the test MSE may not. When a given method yields a small training MSE but a large test MSE, we are said to be overfitting the data.

Overfitting refers specifically to the case in which a less flexible model would have yielded a smaller test MSE.

The expected test MSE, for a given value $ x_0 $, can always be decomposed into the sum of three fundamental quantities:

Equation $ (\ref{eq2.2}) $ tells us that in order to minimize the expected test error, we need to select a statistical learning method that simultaneously achieves low variance and low bias. Note that variance is inherently a nonnegative quantity, and squared bias is also nonnegative. Hence, we see that the expected test MSE can never lie below $ Var(\epsilon) $, the irreducible error.

If a method has high variance then small changes in the training data can result in large changes in $ \hat f $.

On the other hand, bias refers to the error that is introduced by approximating a real-life problem, which may be extremely complicated, by a much simpler model. For example, linear regression assumes that there is a linear relationship between $ Y $ and $ X_1, X_2, \cdots, X_p $. It is unlikely that any real-life problem truly has such a simple linear relationship, and so performing linear regression will undoubtedly result in some bias in the estimate of $ f $.

The Bayes Classifier is a very simple classifier that assigns each observation to the most likely class, given its predictor values. In other words, we should simply assign a test observation with predictor vector $ x_0 $ to the class $ j $ for which $ Pr(Y = j \vert X = x_0) $ is largest.

E.g. we have plotted a small training data set consisting of six blue and six orange observations. Our goal is to make a prediction for the point labeled by the black cross. Suppose that we choose $ K = 3 $. Then KNN will first identify the three observations that are closest to the cross. This neighborhood is shown as a circle. It consists of two blue points and one orange point, resulting in estimated probabilities of 2/3 for the blue class and 1/3 for the orange class. Hence KNN will predict that the black cross belongs to the blue class.

Despite the fact that it is a very simple approach, KNN can often produce classifiers that are surprisingly close to the optimal Bayes classifier.

Once the data has been loaded, the fix() function can be used to view it in a spreadsheet like window.

Once the data are loaded correctly, we can use names() to check the variable names.

To refer to a variable, we must type the data set and the variable name joined with a $ symbol. Alternatively, we can use the attach() function in order to tell R to make the variables in this data frame available by name.

In conjunction with the plot() function, identify() provides a useful interactive method for identifying the value for a particular variable for points on a plot. We pass in three arguments to identify(): the x-axis variable, the y-axis variable, and the variable whose values we would like to see printed for each point. Then clicking on a given point in the plot will cause R to print the value of the variable of interest. Right-clicking on the plot will exit the identify() function

Before exiting R, we may want to save a record of all of the commands that we typed in the most recent session; this can be accomplished using the savehistory() function. Next time we enter R, we can load that history using the loadhistory() function.